Gingerbread geekery is now firmly established as a Christmas tradition (three iterations and all that Christmas jazz), but after last year's star destroying success, we (Silje, Tor & I, with the occasional encouraging noises from Karoline & Anja) thought we'd change the direction ever so slightly this year. We hereby include Doctor Who in the box labelled "Christmas worthy". 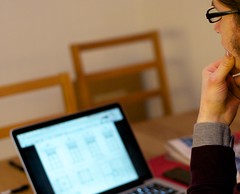 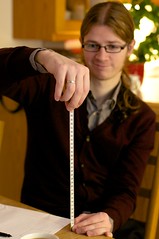 Being well versed in gingerbread making, we have learnt the value of a good blueprint. And the internet being what it is, we found one for both the TARDIS and Daleks. 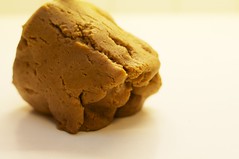 Tor also appropriated the measuring device from my mother's knitting kit, and a triangular one from my sister's long abandoned maths stash; and so we set to work.

Still a bit bruised by the utter gingerbread dough disaster that was 2012, we bought the dough ready made this year as well, but that does not mean there was no work involved. While Tor may have been the brains of the operation, I want it noted that I was the muscle. 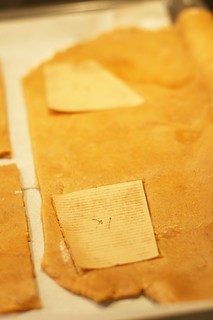 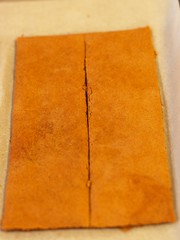 We have yet to learn that gingerbread is an agent of chaos, however; measuring is still very much something we do both before and after baking. The universe refuses to conform to our orderly impulses, probably due to the anarchic influence of the Doctor.

The TARDIS was surprisingly simple to make (we assume the "bigger on the inside" happens once decorations are complete), the only caveat being that you must divide the doors before the gingerbread has cooled.

The great side-effect of having to cut the gingerbread after the baking is that you are left with gingerbread sticks which you can eat to keep the blood sugar up and the atmosphere friendly (or to stave off hungry relatives intent on just tasting a piece of the time-travelling police box, thereby saving both the TARDIS and the universe). 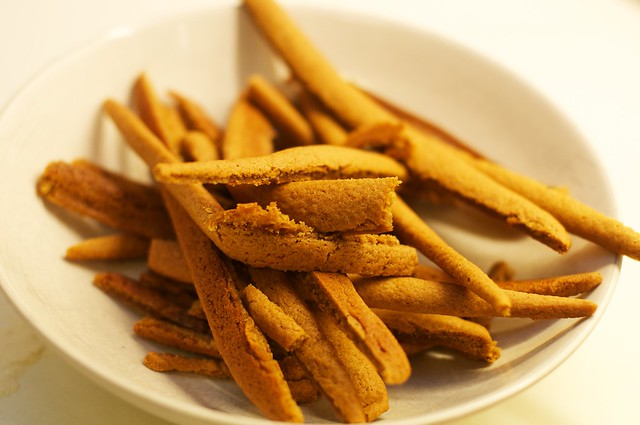 Having recovered enough from the trauma of the Death Star to cautiously attempt something vaguely rounded again, we decided to make Daleks to accompany the TARDIS (Christmas is all about tension between mortal enemies, after all). 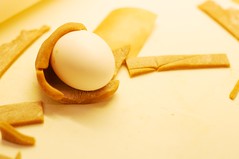 Because we know gingerbread does not naturally form curves, we reached for an egg (or, rather, three). Two of these are cut in half (a very delicate process, as you can imagine) in order to serve as support during the baking, the third is kept whole for shaping purposes -- 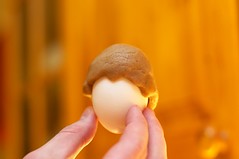 an empty egg famously does not offer much resistance.

If you accidentally make a Playmo head, that is not a problem: the baking process is the great equaliser, and it will come out looking like a bit of a shapeless blob no matter what you do. That is what knives are for.

Here are some pictures of Dalek parts pre-assembly.

The baking complete, we reached for the only ingredient we are fairly certain was also part of the Gallifreyan TARDIS design, namely melted sugar (the only adhesive strong enough to defy the time-space continuum). 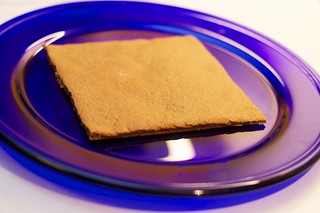 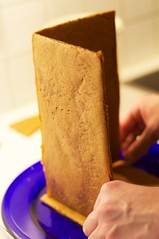 We placed the base on my mother's large blue plate, in part because we do not believe in blue food colouring, and so needed some other way to incorporate the TARDIS' blueness. 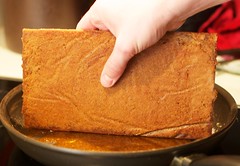 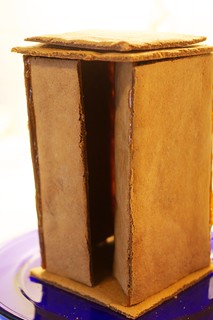 The easiest way to cover the corners in caramel is to dip the whole thing in the pan.

Once all sides are assembled (we did it with one door slightly ajar), place the roof, and an additional (slightly smaller) top. 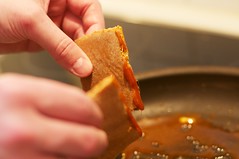 You may now poke it gently to make sure it is sturdy enough to survive an attack by Daleks. If it survives, assemble said fiends.

You may notice the recourse to the tried and tested 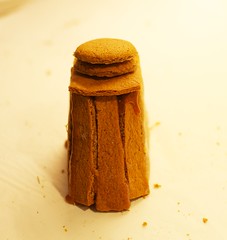 "dip it in the pan and hold it still until it's stuck" technique. Be warned, however, that the smaller the pieces, the greater the risk for burnt fingers. And caramel gets quite hot.
Then again, you would expect making a Dalek would cause you some pain and suffering. Rejoice if you are still alive at the end of it all. 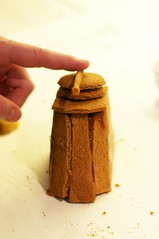 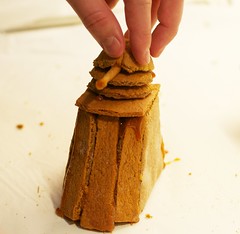 The base assembled, add two circular sections before affixing the eye-stalk (the latter, lacking a more technological variant, may be created by dipping one of the left-over gingerbread sticks in cooling caramel. 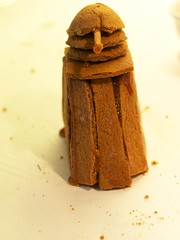 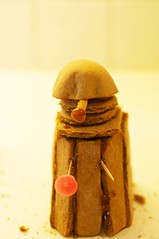 And to cap it all, add the helmet/head thing. Presto, you have something that looks like a Dalek.

If you are not yet cowering in fear, however, that would be because it is currently missing any offensive capabilities. Also, it is rather cute.

To remedy one of these things, affix a Gelé topp to a toothpick, and add another toothpick to the mix.

Step back. Approve. Or run screaming. 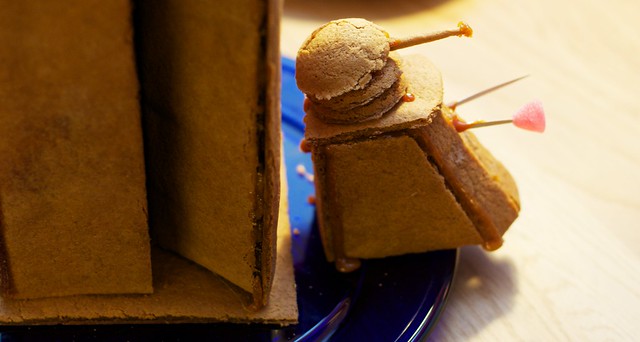 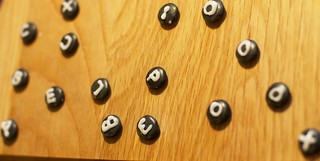 We have learnt, through the long, hard years, that the icing must be ... dense.

Tor proved his mettle in the mixing: We got icing you could actually write with (not to mention, fasten things with!). It is like a Christmas miracle. 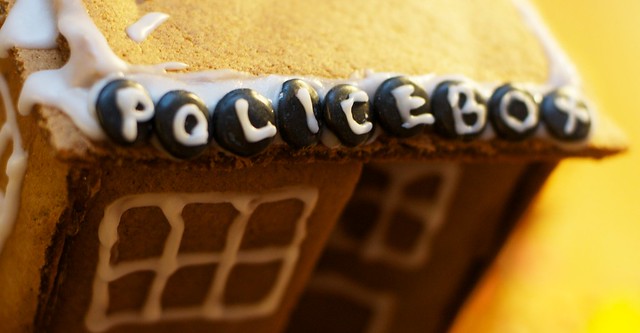 I am fairly sure the Daleks are only genocidal maniacs because they don't feel pretty. We therefore decided to cover them in pretty colours and swirls of icing sugar, hoping it would improve their disposition. 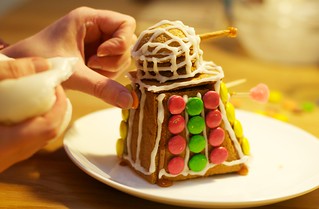 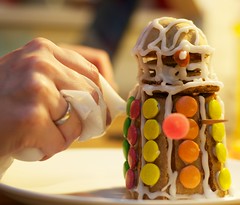 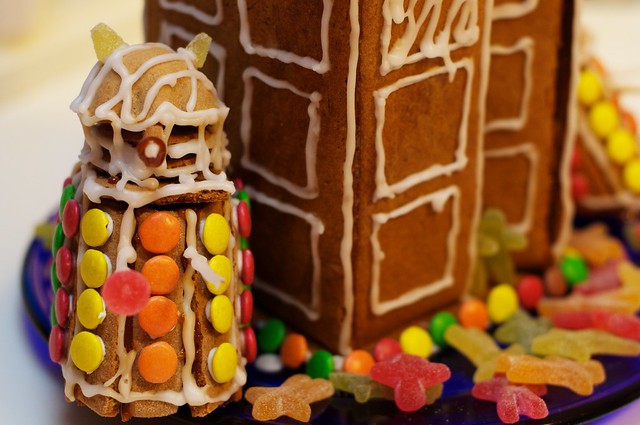 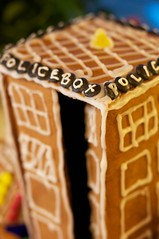 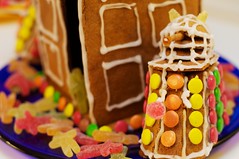 We lost of whole bag full of men to these cold-hearted (though adorable) killing machines. The only survivors are two souls who made it to the TARDIS just in time.

Hopefully the Doctor will come looking for his box and save us along the way. 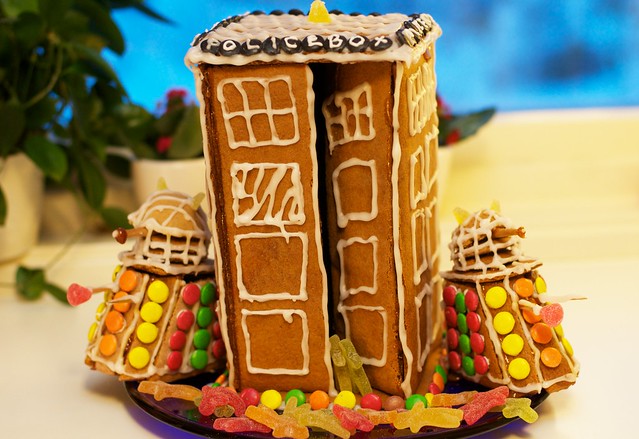